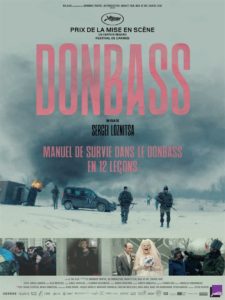 DONBASS
A film by Sergei Loznitsa

In the eastern region of Donbass, a hybrid war blends open armed conflict, crimes and looting perpetrated by separatist gangs.
In Donbas, war is called peace, propaganda is erected in truth and hate claims to be love.

A journey through the Donbass is a series of crazy adventures in which the grotesque and the tragic mingle like life and death. This is not a tale about a region, a country or a political system but about a world lost in the after-truth and false identities. This concerns each of us.